Lately we’ve been seeing a lot of hype from DIY selling and promoting DIY solar generators that you can build yourself at a fraction of the cost.  Honestly, this sounds great!  In fact, I love DIY projects!  But lets see how much you can really save with a DIY generator, and is the portable solar industry ripping you off like they say?

Let’s start with an analogy.  You want to buy a house, and in your search, you find a house that seems to be what you’re looking for- it’s got lots of square footage, beautiful landscaping, and the price is insanely low with it’s motivated seller.  Because it is a great deal you decide to snag it right away, and you’re super excited that you’re now the proud owner of a new home!  You invite your friends and family over and have a party.

The excitement lasts until several months down the road, when you realize something’s not quite right.  Your power bill is insanely high, and your house is always cold in the winter, even with the heat running constantly.  After some investigating you discover there’s no insulation in the walls or attic, your furnace was installed sometime in the 80’s, your windows have leaks and cracks, and your hot water is more like lukewarm.

So what does this mean?  It means that with the extra energy costs from a poorly efficient home, it will eat up the money you saved buying your home at a discount within a few years.  In addition, it will end up costing you more than you saved to fix it all.  Now you might be asking yourself, “What does this have to do with my DIY solar generator?”  Well, I’ll tell you.

The #1 lie most DIY marketers are pushing is that you can build a DIY solar generator for half the price as a commercial unit, and it will do twice as much.

This is very similar to buying a poorly built house at a discount.  Yes, you can build a solar generator with cheaper components for under $1,000, and on paper it may look like it will outperform the more expensive commercial units.

But lets take a real look at how our DIY Solar Generator will compare by looking at two different DIY systems.

Now imagine you have two people trying to sell you these two generators. Would you think the guy selling system #2 is ripping you off since he is selling you a slightly more powerful system, but is charging you 4X as much as system #1?  On the surface I’m sure you’re thinking there is no reason to spend $4,633 on a system when a $1,054 system will do just as well.  I know, I used to think this same way.  That is until I did some real life comparisons and found out the $4,633 system is a bargain compared to the $1,054 system!

Since I have discovered this little known secret I have been trying to spread it as fast as I can, to everyone I know.

Now if you’re like me, you aren’t just going to take my word that the $4,633 system is a bargain, so I’ll prove it to you. I have built the most sophisticated solar calculator available, which will tell you (very accurately) how a system will perform.  So lets take a look with some DIY solar generator comparisons.

Comparison #1: Comparing our two DIY systems running nothing but a fridge. 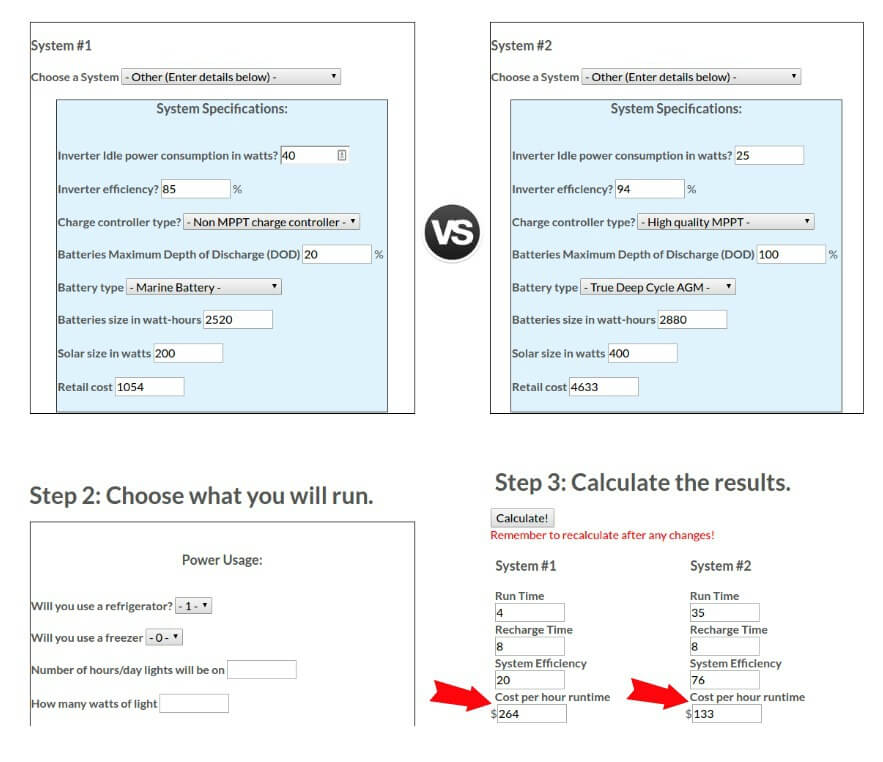 As you can see, the real world results are surprising!

The cheaper system will only run your fridge for 4 hours (which is pretty much useless),

whereas the more expensive system will run it for 35 hours!

That’s nearly a day and a half without sun!  Also, if you look at the Cost Per Hour of Runtime you will see the more expensive system is really about half the price!

Not only does the system with quality components do more for your money than the cheaper one, it will last longer as well.  With a cheap system, you will be replacing components often, and you’ll be lucky if your batteries last one year.  Also, if you want to run a fridge for 35 hours you’ll have to build almost 9 cheap systems to get the same amount of run time as a quality DIY system.  That would calculate to nearly $10,000!  You would end up spending much more on a cheap DIY system.  Do you still think system #1 is a bargain?

let’s see if commercial solar generator manufacturers are ripping you off?

Comparison #2: Compare our cheap DIY solar generator ($1,054 system from above example) to a well-known commercial system.

(On a side note: The $1054 price is just for the components of the system, and does not include labor or other costs associated with selling a commercial generator).  Minimum this system would sell for $1,500, so we’ll compare it to the most popular solar generator on the market, the GoalZero Yeti.

System #1 is our cheap DIY generator, and System #2 is GoalZero 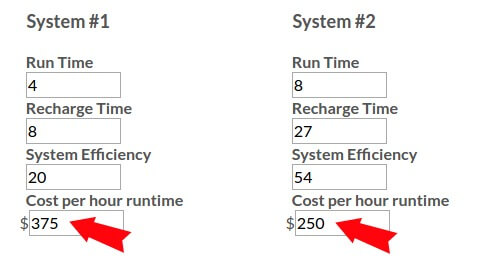 For the price, it doesn’t appear that GoalZero is ripping anyone off. Their charge times are a little high, but could be fixed by adding some more solar panels, then you would have a nearly identical price per runtime as our DIY generator.

Comparison #3: Compare our quality DIY solar generator (System #2: $4,633 from above example) to a well-know commercial system

System #1 is our quality DIY generator, and System #2 is GoalZero 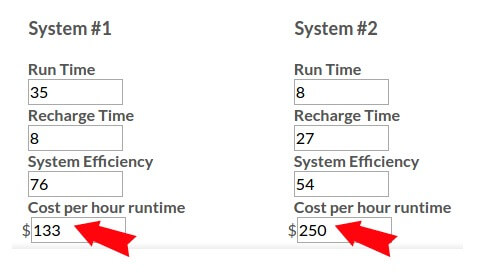 As you can see, our top of the line DIY generator does win out in almost every way. So it would appear Goal Zero performs somewhere between our two systems, but I wouldn’t  say it’s a complete rip-off.

Comparison #4: Compare a top-of-the-line commercial solar generator (Point Zero Energy’s Homegrid 3000 Extreme) and compare it to our top of the line DIY generator.

(On a side note, this commercial generator costs less than the material cost for our quality DIY generator used in the example).

System #1 is our quality DIY generator, and System #2 is Point Zero Energy’s 3000 Extreme 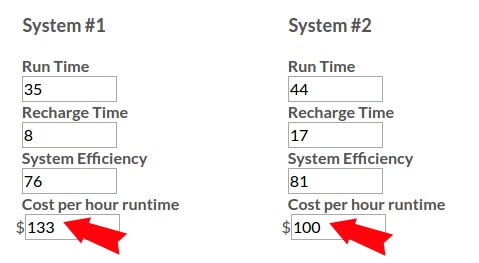 From this comparison we see that the DIY generator gives you shorter run times and costs you more money, both in runtime and total cost to build.

In conclusion, we’ve seen that the DIY solar generator industry is leaving out one piece of very crucial information!  And that is, whether you’re building your own solar generator or buying a commercial one…

Quality, efficient components make all the difference in your solar generator cost and performance!

If you are looking for serious emergency backup, or even off-grid power, it’s worth it to invest the extra money to have a quality solar generator system you can depend on.  And unless you really understand solar and how system components work together, you’ll be better off buying a quality pre-built system, like our heavy duty solar generators.

5 Components You Shouldn’t Overlook When Buying a Solar Generator