We previously learned that an amp is the rate of flow of electrons.  However, amps is not a measure of power.

Your amps tell you the RATE of flow,
and the voltage is the FORCE behind that flow (or the weight you are lifting). 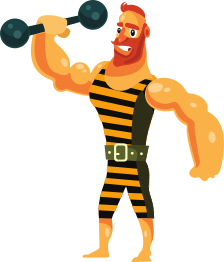 This weight lifter represents low voltage because he has a light weight (low force behind electrons). If he will do the same amount of work as the heavy weight lifter, he needs to move a lot faster.

This weight lifter represents high voltage because he has a heavy weight (high force behind electrons). He can lift slowly and still perform the same amount of work as the light weight lifter moving much faster.

So, what are the advantages of one over the other?  To answer that question, you need to go back to what amps are.  Since amps are the flow of electrons through a wire, that means there is a limit to how many amps you can squeeze through a certain size wire.  When you try to force too many electrons through a small wire, it gets hot, wasting power and creating a fire risk.

So, if you produce 1000 watts with only 10 amps and a voltage of 100V, you could use a very small wire.  However, with 100 amps and 10 volts you would need a huge wire to be able to carry that many amps.  This is why power lines that transport large amounts of power are usually 69,000 volts or more.

The downside to using high voltage is that it is much more dangerous.  I won’t go into all the details, but the higher the voltage the easier it is for you to get electrocuted.  This is why we use transformers before power goes into your house lowering the voltage down to 240v, and 110v for most outlets in your home.

Power is also a rate, similar to how amps is electrons per second that is flowing through a wire.  The actual SI units for power is Joules per second.   However, the more common term in electricity is watts, in mechanical terms it is horse power Because power is a rate,  power it is not something that is stored,  just like gallons per hour is not stored.  You would never say you have a 100 gallon per hour tank, or say your car puts out 300 hp per hour.  Unfortunately the term watt is often used as energy(watt-hours) instead power.  Have you ever herd anyone say a solar panel will put out 100 watts in an hour or say a battery is 1200 watts?   That is using the term watts as energy instead of power, and is not correct.

In our weight lifting example, when you multiply your reps/hour (amps) X weight (volts).  You would get a rate of power, usually calories/hour.  To figure out how many calories you actually produced, you would need to multiply by the time you spent.

This leads us to the next part which is energy.  Energy is simply power over time.  In weight lifting, if you’re producing 100 calories/hour, for one hour, you produced 100 calories.   That is pretty strait forward, but when we look at electricity, if you produce 100 watts for one hour, it becomes 100 watt-hours.  This is not as intuitive because the term watts is a rate without the units of time on it like calories/hour or gallons/hour.

What you need to know:

Power:
Power cannot be stored, it is instantaneous
Has units in joules per second, or more commonly watts
Appropriate usage:  Solar panels output, inverter output, appliance power usage
Commonly misused for: Battery capacity (battery capacity is watt-hours)  or watts per hour (watts per hour, it not a valid unit, and does not make sense to use)

Energy:
Energy is power over time
Has units of Joules, or more commonly watt-hours
Appropriate usage: Battery storage, Power generated in a solar panel in a set amount of time (one hour, two hours, one day etc)